Dance in a circle of women…

Dance in a circle of women 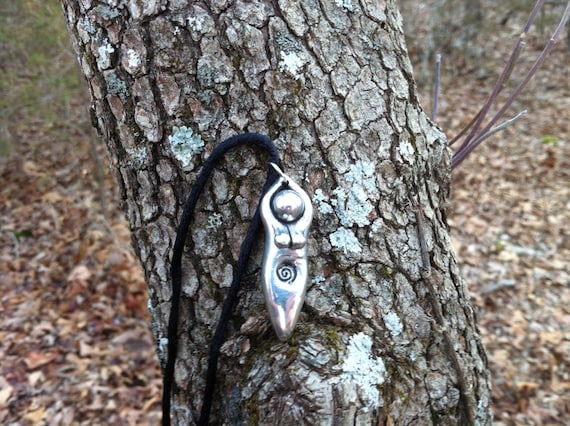 Apparently, it takes me a complete year to finish “processing” my annual Gaea Goddess Gathering experience and finally writing a blog post about it! At the moment, I’m embroiled in packing and preparations to go to this year’s event beginning later in this week and don’t really have time for in-depth posts…but, here I am. I’m traveling this year with two friends and meeting my mom, sister-in-law, and another friend there (as well as friends made at past events too). One of the things I realized last year was how much I appreciated the sense of connection and community with a larger circle of women than just our own small local group.

One of the songs we sang, danced, and drummed to around the fire at GGG in 2013 was Dance in a Circle of Women. I’ve been humming to myself as I pack for this year’s event. I created the pewter pendant design shown above based on the song and also this one, which we’ve had trouble casting properly and thus only a very small quantity exist (traveling with me, not available online yet!):

At this year’s festival, I am vending as well as giving a workshop on Womanrunes. I’m also going to be 8 months pregnant, but I won’t be bringing any kids with me this year (other than the one inside!), which hopefully means my attention will be less fragmented than in years past. I’m a little worried that the twin demands of my merchant booth and wanting to go to the various good happenings will create a similar sense of fragmentation though.

One of the things I enjoy about the GGG is collecting resources to bring home to my own community. I jotted down lyrics to these songs from the 2013 festival and have used some of them locally:

Make sacred space
Remember who you are

(we sang this one during the main ritual on Saturday night and it was lovely in the darkness, surrounded by candles and be-robed women!)

Oh woman
Oh sister
She is me

Holding me
That I may hold you

I am alive
I am beautiful
I am creative
I am…
I can do anything
I put my heart and mind into.

(this one is a raucous and delightful experience when shouted out in call-and-response format by the fireside. I’ve used it several times since experiencing it at GGG with Priestess Kim.)

So, as I described in a past post, the morning after our 2013 return, I’d typed up a list of fabulous insights gleaned from the experience and my ipad “notes” feature experienced a bizarre glitch never experienced before or since and deleted my entire list. I was able to remember some of them and re-type them, but after that moment they never made it into another post of their own:

…After my unbinding ritual, I walked slowly back to the house feeling light and contemplative. Inside, before anyone else woke up, I typed up all of my reflections and insights from this year’s [2013] GGG. I felt integrated, settled, whole, and at peace. I went to do laundry and when I was in the room, I thought of something else to include in my list which was going to be a later blog post. I returned to my screen where the insightful note had been waiting for me and it was gone. Never to be recovered. I could NOT believe it. All my insights! All my wisdom! Gone! I have to start over…But, then I really just had to laugh and cry a little, because here was another insight, another lesson, another hiccup in my story. And, not everything has to be a blog post after all….

Since it is time for 2014’s event already, I decided to just put up my unfinished, unformatted, incomplete, re-created list from last year and here it is…

…When I attended the GGG this year, one of the realizations I came home with is that sometimes I feel like people are trying to get me to be less (more about this some other time). And, I remembered a session I had with a healer who did a somatic repatterning process with me—one of the beliefs she tested on me was, “I am not enough.” It got a marginal response, but then she tested, “I am TOO MUCH.” And, THAT is the one that tested as true. I wonder how much about myself that I try to change or that I struggle with actually comes from the fear of being, too much. Too intense. Too active. Too talkative. Too much thinking, too much writing, too many ideas, too many projects, too much waving of my hands and pacing when I talk. Too, too, too, too much.

I also made a lot of observations about the role of non-facilitating members during rituals as well, previously explored in part in this past post:

…I witnessed how easily a ritual can lose power when the co-circlers do not take the ritual seriously. It is easy and simplistic to point to the Priestess as the one who “failed” to hold the energy of the circle, but the responsibility for the circle belongs to all its members. Ruth Barrett in Women’s Rites, Women’s Mysteries explains the responsibilities of circle participants as such: “Ritual Priestessing is not for the faint of heart. If you fear chaos, the unexpected, or the unforeseen, choose another vocation. A ritual facilitator regularly finds herself in challenging situations that are not at all what she originally planned. In order to facilitate others, you first need to know how to be a good participant. I don’t believe that it is possible for a woman to priestess/facilitate a ritual effectively until she first knows how to truly participate in one…”

I would also add “avoid heckling.” What does this mean? In my observations at the GGG, I noticed a trend for circle participants to call out different comments in a joking way, either across the circle or to the woman facilitating the ceremony. While it seemed to be done in a light-hearted way and perhaps was the local custom of this group of women, the effect on the group as a whole was striking. The “heckling”—at least to me—led to palpable energy “leaks” in the ritual container and resulted in a commensurate drop in the power and focus of the circle.

And, some pictures (captions will show if you click to enlarge): 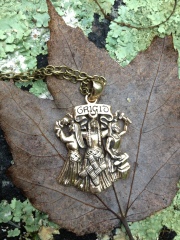 My Brigid medallion arrived just in time for me to wear! 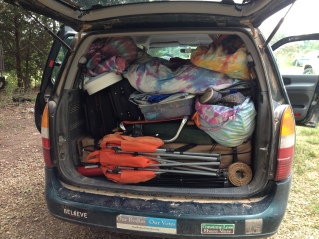 This is what a packed van prepared for GGG looks like! 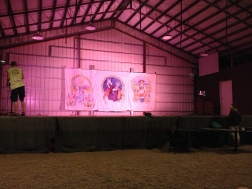 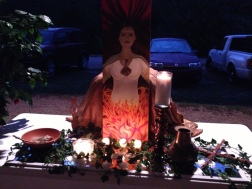 It was raining and so the temple dedication ritual was held inside the pavilion rather than the temple.

Lovely gemstones from one of the presentations. 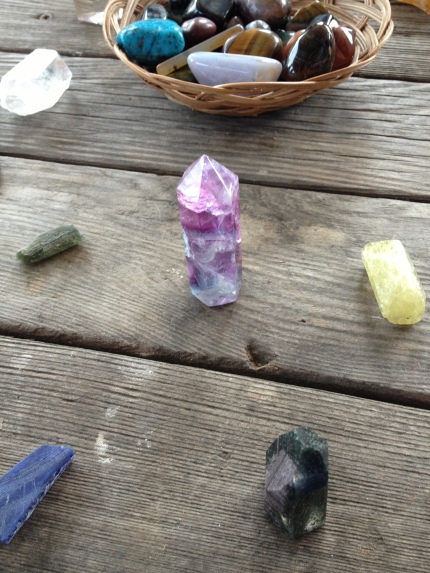 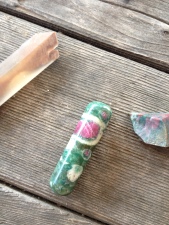 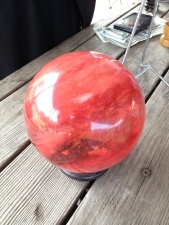 Fell in love with this cherry quartz sphere.

One of the beautiful, unexpected experiences was watching the full moon rise over the ritual circle.

The temple at night was a magical place! 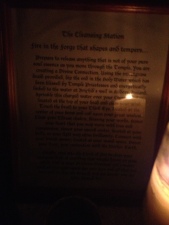 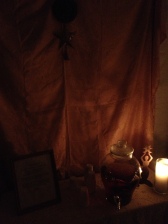 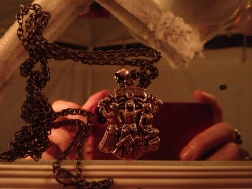 Dance in a circle of women…

The next day we experienced a full moon sunrise, which felt pretty special.

Some of my booth wares.

The fire damage at the temple.

My little maiden has some tea from Brigid’s temple 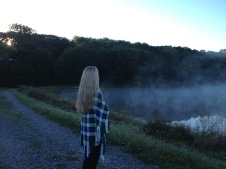 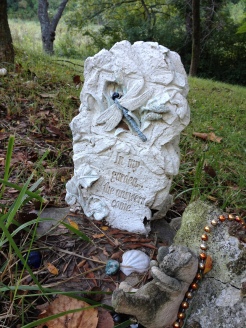 I make the effort

3 thoughts on “Dance in a circle of women…”