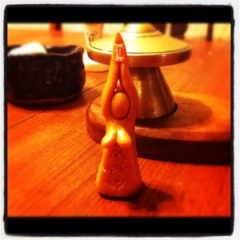 Mini mamapriestess sculpture I made to take with me for my medicine bundle.

Last summer after I finished my priestess certification and I’d been facilitating women’s retreats and circles for about four years, I got a wild idea to go to a womanspirit or goddess festival of some kind. I did a google search and found one that sounded great—the Gaea Goddess Gathering–and it was happening in just two weeks. Imagine my surprise to then look at the bottom of the screen and see that it was located only a five-hour drive from me, just over the border into Kansas. I decided it was “meant to be.” My mom and a friend signed up with me (and my toddler daughter) and we packed up my van and went! The night before we left on our adventure, I sat down at the kitchen table and felt a knife-like stinging pain on the back of my leg. I’d accidentally sat on a European giant hornet (these are not regular hornets, they are literally giant hornets about two inches long).

Sting before I left.

Though it became hot and swollen and terribly painful, we set forth anyway. I asked for input on Facebook and did google research and started putting benadryl cream on it, even though I usually go with home remedies over medical-model remedies. It got worse and worse, eventually running from my hip to my knee and wrapped around my entire leg so that two thirds of my thigh was sting-area and the difference in size between my legs was noticeable through clothing. During the festival, as I watched myself get worse and worse and people kept making remarks about needing epi-pens and maybe I should go to the hospital, I decided to dispense with the benadryl and listen to the wise women instead. My friend found plantain and made me a poultice. The cook gave me baking soda that I applied in a paste. I went to a ceremony that involved a healing ritual with sound and a priestess in a tent beat a drum over me as I lay there on my stomach. After a little Reiki healing, she then leaned very, very close to my ear and said quietly, “are you taking good enough care of yourself? You give and give and it is time to receive. You need to be taken care of too.” And, I cried. 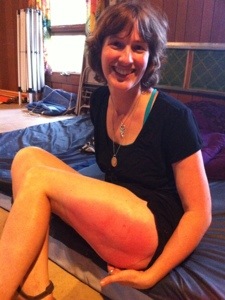 Sting after arriving. I didn’t take any pictures of it at the worst. It got about twice as bad as this. Every time I thought it could not possible get worse, it got twice as bad!

I came out of the tent and laid on a bench and women I didn’t know came and put their hands on my back and made me tinctures of strange plants they found in the herb garden and I drank it even though it almost made me gag. Another woman I didn’t know rubbed my back and though I couldn’t even see her face, she leaned close to my ear and said, “sometimes life stings you. Your friends, your family, being a parent, taking care of your children. It stings sometimes. Things people say without meaning to sting you. You’re sensitive, Sometimes it stings a lot and you worry that you’re not good enough. I see you with your baby. You are such a good mother.” And, I cried again, lying there on bench in the middle of nowhere with my dress pulled up and my red, sore, swollen, horrible thigh covered with a poultice of mysterious weeds, surrounded by women I didn’t know, but who were caring for me. And, I got better. By the time I got home, the sting was almost totally healed.

As soon as I returned home, I made a list, intending to develop it into a blog post about everything I’d learned at this gathering of women. The list languished in my drafts folder and the wheel of the year continued to turn and now it is September again and next week, some friends and I will be hopping back in my van and heading back to the GGG for this year’s festival. I decided the blog post will never get “developed” into the post I had intended, but that I can still share my list anyway. I’m also writing now because I’m going to go ahead and give myself a week off from blogging and I wanted to post some sort of explanation as to why. I’m going to focus on getting ready for the festival (I’m selling jewelry while there too!) and hanging out with my family (and, oh yeah, grading all the papers that are due this Sunday night!).

So, what did I learn at the GGG?

When I got home from this festival, I was so inspired that I planned and facilitated a pretty great nighttime, firelit “sagewoman” ceremony in a teepee (with drumming on my new community drum) for the wise women of my own community. As a ritualist/ceremonialist, I learned from the GGG-experience that ambiance really, really matters in offering a cool ritual.

Since last year, I’ve developed my ceremonialist skills even further and last month received an additional supplemental ordination from the American Priestess Council. I’m almost three years into my D.Min program, I’ve taken advanced coursework in ritual design as well as pastoral counseling, liturgy, the role of the priestess, ethics, history, and so forth. At this time last year, I was struggling with whether or not it was “okay” for me to own the Priestess identity I felt “called” into and at the GGG I was seen and heard into this identity particularly by my friend and also by my mom. It turns out it is okay for me to serve others as a Priestess and to claim that title with authenticity even though I’m not as perfect and amazing as I feel like I should be (I’m also a blogger for SageWoman magazine and I’m currently working on a post called who does she think SHE is, that is about exactly this tension). 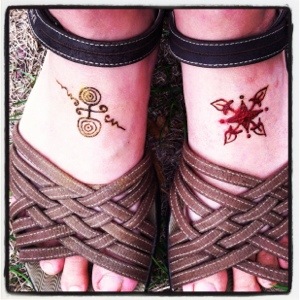 Henna feet! From the woman who did this for me, I learned the phrase: “sparkles are my favorite color.”

Medicine bundle! This was the best class ever. The woman brought piles and piles of random and awesome stuff and it was all free to choose what you wanted for your bundle. How cool is this face?!

She also had simple clay goddesses for us to paint and attach as well as we could.

Pensive little child  gazing back at the stairs up which she just journeyed. 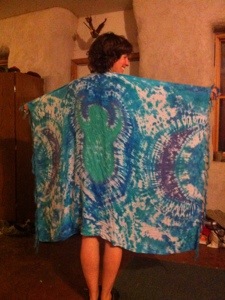 Back home demo’ing a beautiful sarong gifted to my by my seeing friend! 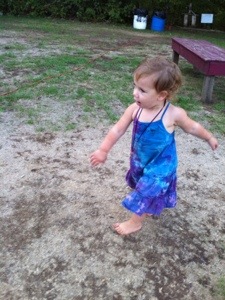 When I got home, I was inspired to make some new sculptures and my husband cut a lovely gemstone and made a pendant.

Here I go again! I wonder what lessons await me this year…

7 thoughts on “Gaea Goddess Gathering: Listen to the wise woman….” 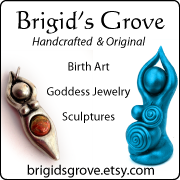