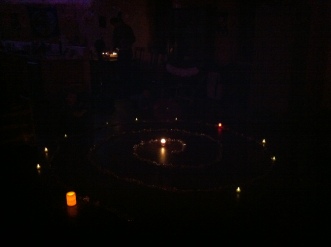 In my winter solstice post, I referenced our family’s tradition of walking a “solstice spiral” each year as part of our year-end ritual. It is based on the Waldorf tradition of an “advent spiral,” which is often made outdoors using evergreen branches. During the first year we tried the spiral, I did decorate the outside of our spiral with evergreen branches, but since then I’ve simply opted to lay out a spiral shape on the floor using silver and gold tinsel garlands. It is simple, but once ringed with candles and the household lights turned out, it becomes magical! I wrote about the purpose somewhat generically in this winter solstice post from last year:

Then, lighting candles, we walk our traditional “solstice spiral” (made with gold garland laid out in the spiral on the floor, ringed with evergreen branches and candles)—leaving behind our losses and that which we no longer need in the darkness, and carrying forward the bright spark of new possibility that is taking root in our lives for the new year. After exiting the spiral, we place our candles together on the Yule log to represent that which we hope to bring into the full light of dawning year.

via Goddess Wheel of the Year: Winter Solstice Ritual | WoodsPriestess. 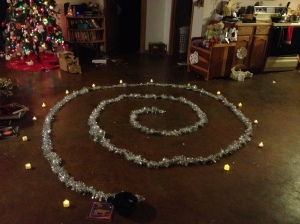 This year’s spiral before the lights are out.

Each year during our family winter solstice ritual we review our lives from the past year—things we’re proud of, things we’d like to let go of—and then set new intentions for the coming year. We write these down on pieces of paper that I then roll up together and put in a box. The following year, we each open our papers and read what we wrote the year before and see how/if these intentions manifested over the year. It is very interesting to see how we rarely remember exactly what we wrote and yet, how often those things have come to pass. After this goals review process, we all get our candles and walk the solstice spiral in turn to symbolize the setting forth of our new intentions. This year, as each person came out of the spiral, I gave them a stone totem animal that I’d purchased from a nifty ebay seller and also a card from the Animal Powers Meditation Kit I’d conveniently won in an online giveaway recently. The stone animal was my gift to each and the card was just an intuitive solstice message for each that they then returned to the box. We carried our candles over to the Yule log and did the following responsive reading as I lit each candle in the Yule log: 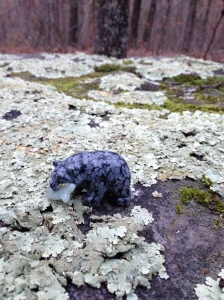 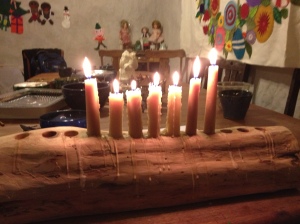 Then we each shared the animal message from our cards. I’m actually planning to do a variation of this ceremony on New Year’s Eve when some other members of our family will be visiting. We will use it as a welcoming-the-new-year path and I have some different things to give them at the end of this one (you’ll have to wait to hear about that later, because some of them read this blog and I don’t want to spoil my little surprise!) 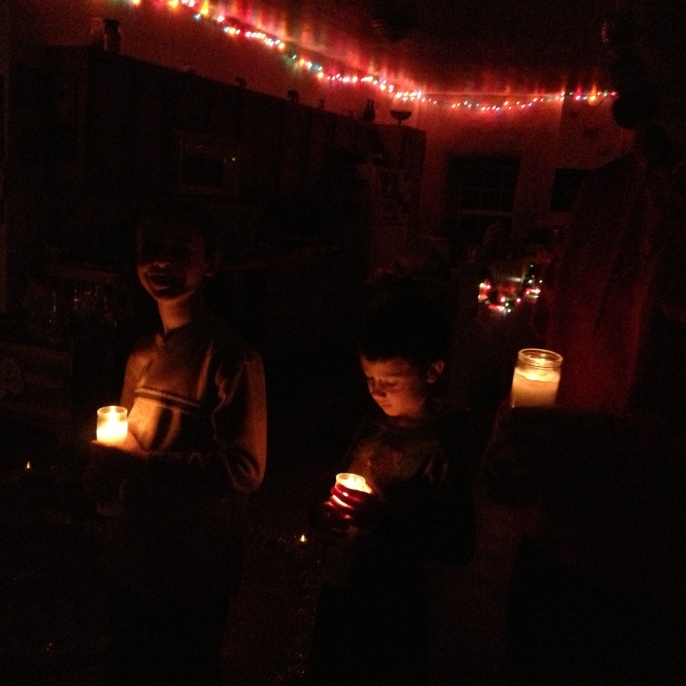 My boys and my husband getting ready to walk the solstice spiral.

Daughter waiting for her turn. 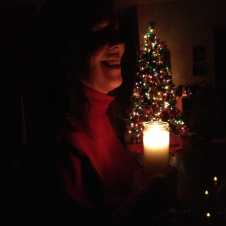 My mom waiting for her turn too. 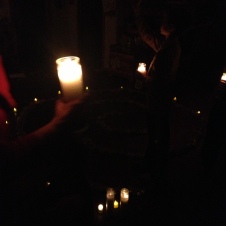