“Wisdom comes from applying yourself wholeheartedly to whatever you’re doing. The lessons in life are in everything.” –Pema Chodron (in Open Mind, 12/18)

Tonight after I finally extricated myself from my children and stumbled down to the woods in the dark to stand briefly in the light of the full moon, I recognized myself falling into a familiar pattern of self-recrimination—of wishing I was better than I am and feeling annoyed and frustrated with myself for having become annoyed and frustrated by my family. We spent all day today having a “Hobbit Day”—eating a series of themed foods while watching the first Hobbit movie and then driving into town to watch the second Hobbit movie in the theater. It was great fun, but by the time we got back home, the rest of my to-dos felt pretty hopelessly piled up around me and I felt somewhat abandoned in my efforts to get them done before bedtime (such as pack up Christmas gifts for out-of-town relatives). I also am behind on planning my family’s winter solstice ritual and really expected to have a chance to finalize those plans today. I feel perpetually behind on many things much of the time and more just keep coming. No breaks.

The final straw tonight was when I opened up my bag of cinnamon sticks that I’d bought to make cinnamon stick stars with on solstice or New Year’s Eve and they’re totally, ridiculously, uselessly short. It is too late to send them back, too late to order more, and they’re dumb and I feel dumb for having ordered them too hastily without checking the size. When I went to the woods feeling as if I should be more better, I took some of the cinnamon sticks with me to leave as an offering of sorts and to be a reminder that I’ve let go of that perfection worm as well as apologizing for things I don’t need to apologize for. When I came back in, we wrapped and packed the gifts to mail, it got later and later and I realized that my time to create a post for today was once again, up. And, I felt bad about that in two ways—one for my own silliness in making a monthly post commitment during holiday season, when obviously that isn’t particularly sensible/practical/possible, so why don’t I just give up the idea, and two, for even considering not showing up for myself and moving it up in my priority list/doing it anyway. Essentially, why would I expect this from myself?! AND, why wouldn’t I expect this from myself?! I’m ridiculous. I’m committed. I’m ridiculous. So, I’m still here. This post is being made. I’m not going to apologize for it—either way. For wanting to do it, for not wanting to do it, for not cutting myself slack and letting it go, for showing up and doing it anyway even if it doesn’t make sense…

Then, I opened to that nearly-finished Open Mind book and the quote I opened with was the quote for today and I thought oh. Today I did a wholehearted Hobbit Day instead of the other things that were/are waiting for me. That’s okay. 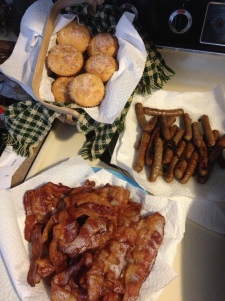 Offering up my too-short cinnamon sticks—and my self-recrimination.
Advertisement