This surprising second winter continues. The ground is snow-covered. The air is frosty. When I went to the woods this afternoon, I thought of some bonewind observations from some cold days last month. Yesterday, when I went to the woods it was snowing sharply enough that I couldn’t face forward on the rocks, but had to turn to the side, to keep cold snow from hitting me straight in the face. I finished a variety of new sculptures this weekend, but I knew it would be too cold to photograph all of them, so I just brought down a couple. I made two new figures with rocks. As I’ve said before, I don’t do this often, just when the rock seems “given” to me. The smaller white stone was laying out on the moss like a gift when I went out to take a picture of my first Crone sculpture. It caught my eye because the rock has a “foot” that looks like it is stepping out/stepping forward and I thought again of my reader commenting on needing a sculpture of a Crone going back to school—so, when I made this one, that is what I was thinking of. She’s casting off things she no longer needs, she’s gathering her energy at her core, she’s finding her balance, and she’s stepping out into a new direction 🙂

I didn’t plan it this way, but it ends up that the two new rock goddesses look like they could hold hands.

And, I’ll write more specifically about these later, but my little girl was asking and asking me to make a “Daddy Goddess” for her the last time I was making sculptures. So, I did. When I showed my husband, I said, “this is a different spin on a Trinity,” and he said, “and it is one that actually makes sense.” I was pleased with them. 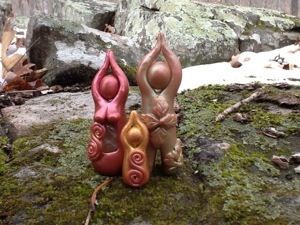