Thursday Thealogy: The Motheredness of the World

I am also of the opinion that Mother Goddess imagery may well be less about women as mothers and more about the motheredness of the world. In this way, I do not find the image of the Mother Goddess is exclusive, rather I find it exceedingly appropriate. Every person and mammal on this planet—male, female, black, white, hetero/homosexual– since the dawn of humanity has had a mother. It is a truly unifying feature. And, it isn’t about the role, it is about the primal relationship. The root of life. As Naomi Wolf writes in Misconceptions while reflecting on an ordinary street scene and suddenly understanding the web of life and the universality of motherhood (even the squirrels!):

“We were all held, touched, interrelated, in an invisible net of incarnation. I would scarcely think of it ordinarily; yet for each creature I saw, someone, a mother, had given birth….Motherhood was the gate. It was something that had always been invisible to me before, or so unvalued as to be beneath noticing: the motheredness of the world.”

This understanding of the invisible net of incarnation is the foundation of my own thealogy and my ethics.

via Goddess Mother | Feminism and Religion.

Goddess imagery is also about valuing human women and their bodies:

The sociocultural value of a divine presence that validates women’s bodies cannot be overestimated. Indeed, patriarchal religion in its most destructive way seems to have grown out of the devaluation and rejection of female bodies. A religion that rejects the female body, that places the male and its association with “the mind” and the soul rather than the earthy relational connection of body, is a religion that easily moves into domination and control of women. Reclaiming Goddess, reclaims women’s bodies—names them not only as “normal,” but as “divine,” and this is profoundly threatening to traditional Judeo-Christian belief systems. Thus, the primacy of relatedness and connectedness as the core feature of the Mother Goddess model has broad reaching implications for women’s spirituality, as a direct contrast to the dominator model of patriarchy.

In Carol Christ’s classic essay, Why Women Need the Goddess, she quotes feminist theologian Mary Daly (Beyond God the Father):

“If God in ‘his’ heaven is a father ruling his people, then it is the ‘nature’ of things and according to divine plan and the order of the universe that society be male dominated. Within this context, a mystification of roles takes place: The husband dominating his wife represents God ‘himself.’ The images and values of a given society have been projected into the realm of dogmas and “Articles of Faith,” and these in turn justify the social structures which have given rise to them and which sustain their plausibility.”

In the same essay, Christ explains: “The symbols associated with these important rituals cannot fail to affect the deep or unconscious structures of the mind of even a person who has rejected these symbolisms on a conscious level…Symbol systems cannot simply be rejected, they must be replaced. When there is not any replacement, the mind will revert to familiar structures in times of crisis, bafflement, or defeat.”…

via Goddess Mother | Feminism and Religion.

Last time I wrote about a similar topic here, I received some comments asking about the role of “the God,” which is not a symbol I engage with or feel comfortable with given how steeped that name is in the oppression of women, saying that a thealogy without the God doesn’t seem very “whole.” While I would still like to address this question with more thought in a future post, as I wrote the above, it came to my mind again, because it is true that almost everything has a father as well—so, what about the “fatheredness of the world”? My thought when originally asked about “wholeness” was that I don’t have a particularly literalist conception of the Goddess and so to me, she is a name for that which holds the all, which is, ultimately unnameable, but can be experienced in a variety of direct ways. I experience it as the Goddess. And, I find political, social, cultural, and spiritual value in the naming of that subjective experience/wholeness/weaving of life as Goddess. “Goddess” as word and symbol is important, really important, because it breaks the patriarchal “hold” on defining divinity.

However, as a mother of sons and the wife of a husband, I have wrestled with questions as to whether Goddess-oriented thealogy excludes them as males in the same way that Judeo-Christian imagery primarily excludes women. I continue to return to “no,” because in their own experience of having been grown and birthed by me (well, my sons, not my husband!), the notion of a female image being fully capable of literally being able to hold both male and female within her, is exceedingly natural, appropriate, and logical to them. When we do family rituals, I do often use spiritual naturalist or spiritual humanist type of language rather than gendered divinity. Sacred Universe is a great term as are the generic labels Spirit or the Sacred or Nature.

As I’ve shared a photo of previously, at my toddler daughter’s request, I recently made a “Daddy Goddess” sculpture as well to go with my many others—as I was making him, I realized I do have some room for a Green Man type of symbolism after all:

And, as I shared in my Feminism and Religion piece, a couple of months ago my six-year-old son made this sculpture for me… 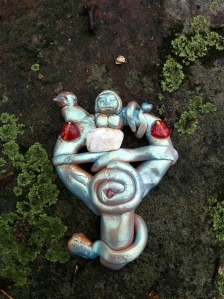 “This is the Goddess of Everything,” he told me. “See that pink jewel in her belly, that is the WHOLE UNIVERSE, Mom!!”

4 thoughts on “Thursday Thealogy: The Motheredness of the World”